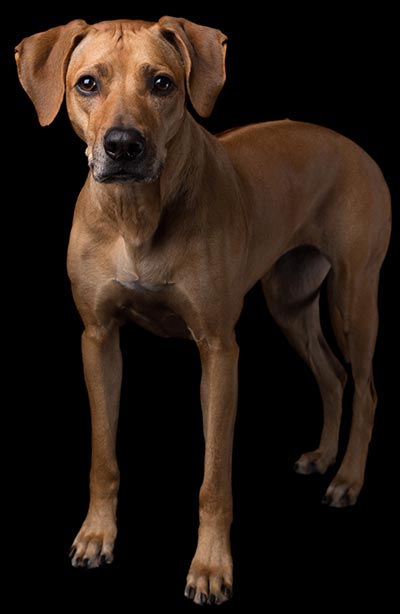 The Rhodesian Ridgeback’s history is a fascinating story. The indigenous people of southern African, the Khoi-khoi led a nomadic way of life. The Khoi-khoi built enclosures called kraals to protect their cattle at night. Dogs were used to chase off marauding lions and leopards, but only the most fearless of dogs would pursue the attack. These according to legend were most often the ridged dogs. The dogs could also herd cattle, fend for themselves and bravely defend the home and hearth. European colonists brought dogs from their continent which were subsequently bred with the ridged Khoi khoi dog for their guarding ability as well as skill on the hunt. Recent genetic research reports that the most significant genetic influence of European breeds is in the following descending order: Great Dane, Boerboel, Greyhound, Basenji, Airedale, Rottweiler, Irish Wolfhound, Bulldog, Bullmastiff, and Doberman.The most common misconception about the Ridgeback is that they actually killed the lions. No dog, no matter how brave can kill a lion. When a lion became a nuisance by continuously raiding a kraal the ridgebacks would be used to track the lion, hold it at bay until the hunter could come.

The Rhodesian Ridgeback is a highly intelligent dog, capable of problem solving and possessing a long memory. They are extremely devoted to their family and need no training to be protective. They require owners who use consistent and positive training methods. Ridgebacks are a classic chow hound that will eat almost anything and are adept counter surfers. This breed requires daily exercise whether it is a romp in the fenced in yard or well supervised dog park or leash walks in the neighborhood.Ridgebacks do have a reputation of being wonderful with children however that is dependent upon training of not only the dog but the kids as well. A Ridgeback deserves to be a true member of the family.

“Before and After Getting Your Puppy. A Positive Approach to Raising a Happy, Healthy, and Well Behaved Dog” by Dr. Ian Dunbar